A year ago a large family wedding for 100+ guests at Ghyll Manor, followed by a lovely honeymoon on Lake Garda, Italy was arranged for one of our children and his bride to be.  The date was 21 March!

Two months ago, everything was going to plan. Three or four weeks ago events in Italy made travel difficult and then impossible. Amid much upset the honeymoon was cancelled. Two weeks ago, the wedding itself came under threat and just a week before the big day the couple decided to scale back. But in the middle of last week, as 20 of the bride’s Irish family decided they wouldn’t be able to come, they all but cancelled the wedding. More upset.

With the Registrar’s agreement they decided to get married in front of  approx 25 close friends and family, and to defer the main celebration until later in the year. By now the Best Man and the Chief Bridesmaid were in self isolation!

At 5pm on Friday, the Prime Minister told the nation to close all pubs, bars and clubs. No mention of hotels…and so Ghyll Manor confirmed the small gathering and lunch for 25.

And so we got to the Big Day. As the Groom and his ushers got ready at our home on Saturday morning, a call at 9.30 from the hotel confirmed that only 20 could stay for lunch…and we would have to spread out!  At 10.30 a call from the Registrar confirmed only the Bride and Groom plus their two witnesses could attend the Ceremony.  At 11.30 another call from the hotel conformed they would NOT be opening the bar! 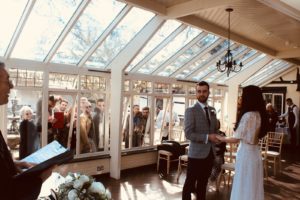 So at 12.00, as we leave home I grab all the Prosecco in my house and sneak it to the Hotel. 20+ guests (including grandparents) stood outside the conservatory where the ceremony was being held,  and watched the beautiful and very happy bride walk down the aisle in front of just their mums and dad. It was a very funny ceremony, the registrar was great, playing to the gallery on the other side of the glass. The bride and groom and the witnesses had to maintain safe distance and apply anti bacterial gel on the pen before signing the registry!!  From outside we all toasted the bride and groom with illicit Prosecco, before the chosen 20 had lunch. Then, because the bar was shut and the hotel wanted us out, we all met at someone’s house and garden for the evening.  It was all a bit surreal, but everyone had  a great day…..

As I first wrote this the newly weds were driving down to Cornwall, to spend a few days in splendid isolation in a Shepherd’s Hut in the middle of nowhere. Within 24 hours, as the lockdown rules were tightened, they were on their way back to see whether they still had jobs!

Was it the wedding they wanted? Did they get to the Italian Lakes? No, but they are happy!