Since the new CEO of Horsham District Council, Glen Chipp, came to see what was happening at the project a couple of weeks ago, we have now got two fab write-ups on the County Times and District Post this week!  Read the text of the article below.Thanks to everyone who came to support us on that day…and for bringing the sunshine! 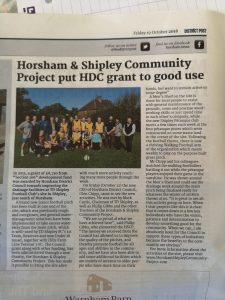 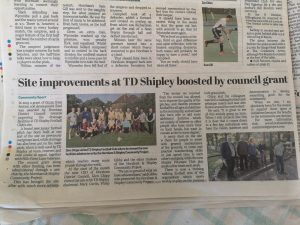 In 2015 a grant of £8,750 from “Section 106” development fund was awarded by Horsham District Council towards improving the drainage facilities at TD Shipley Football Club’s site in Shipley, just south of Horsham.  A brand new junior football pitch has been built at one end of the site which was previously rough and overgrown, and general water-management solutions have been implemented to take excess water away from the main pitch, which is well-used by TD Shipley FC’s 1st Team, Reserves and new Under 18 squad, together with Hills Farm Lane Veteran’s FC. The Council grant along with other funding, has been administered through a new charity, the Horsham & Shipley Community Project. This has made it possible to bring the site alive with much more activity reaching many more people through the week.

On Friday last week the new CEO of Horsham District Council, Glen Chipp, came to see the new activities. He was met by Mark Curtis, Chairman of TD Shipley, as well as Philip Gibbs and the other Trustees of the Horsham & Shipley Community Project. “We are so proud of what we have achieved here”, said Philip Gibbs who pioneered the HSCP; “The money we received from the Council has allowed us to improve the quality of the pitches, and thereby promote football for all ages and abilities in the community, and we have also been able to add some additional facilities which are mainly of interest to older people who have more time on their hands, but want to remain active to some degree”.

A Men’s Shed on the site is there for local people to assist with general maintenance of the grounds, come and practise woodworking skills or just spend time in each other’s company, while the new Shipley Pétanque club meets a few times each week at the four pétanque pistes which were constructed on some waste land in the corner of the site. Following the football theme, there is now a thriving Walking Football arm of the organisation which meets weekly to play on the purpose built grass pitch.

Mr Chipp and his colleagues watched the walking footballers battling it out while the pétanque players enjoyed their game in the sunshine. He was shown around the Men’s Shed and could see the drainage work around the main pitch being finalised ready for whatever the winter of 2018/19 throws at us. “It is great to see all this activity going on here. When I visit projects like this it is clear that it comes down to a few key individuals who have the vision, patience and determination to develop something good for the community. When we can, I am absolutely keen for the Council to support these types of initiatives because the benefits to the community are obvious”.

For more information about the activities of the site, please visit www.HorshamShipleyCommunityProject.com 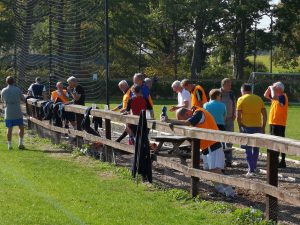 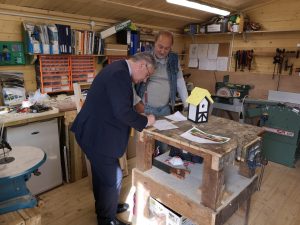 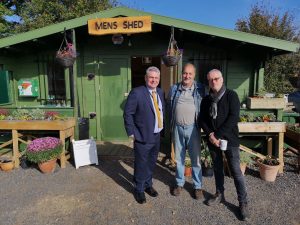 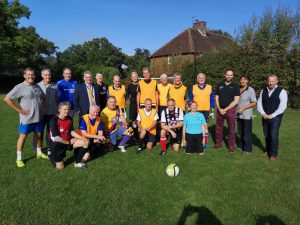